On September 15, 2015, the College held a press conference to launch its DrugSafeBC public awareness campaign. All community pharmacies implemented new security measures including installing time-delay safes to store narcotic and targeted drugs, and displaying College-produced signage in their stores to deter robberies. In addition to standard signage provided to all community pharmacies, the DrugSafeBC campaign featured print, radio, television and social media ads to build awareness of the new security measures. Vancouver Police Chief Adam Palmer spoke at the press conference, stating that he expects the program to have a huge impact in curbing the flow of dangerous narcotics from pharmacies onto the street. Since implementing DrugSafeBC, community pharmacy robberies have drastically declined (see Figure 1). DrugSafeBC created safer pharmacies, which leads to safer communities. 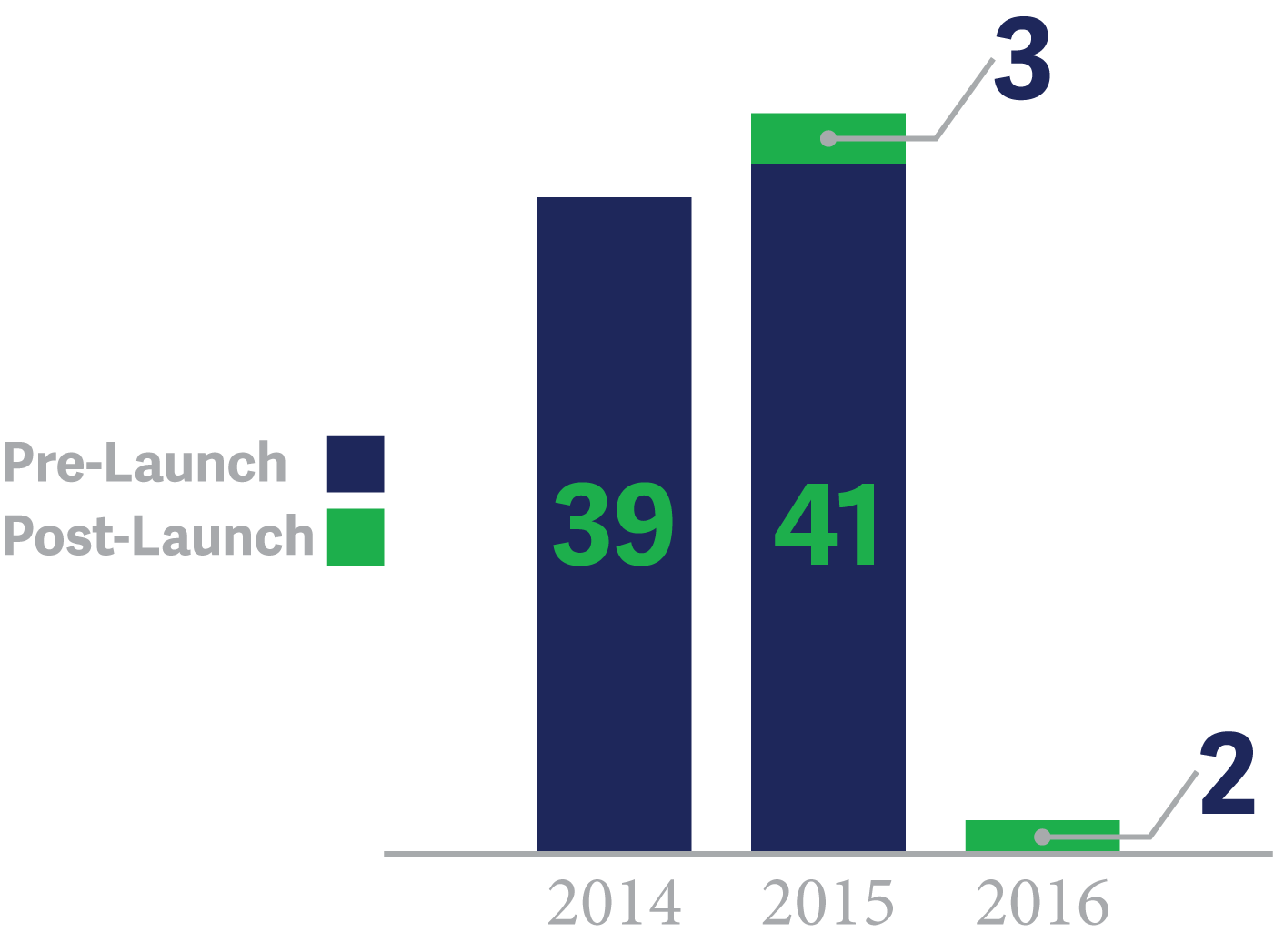 The College has continued to move ahead with the Certified Pharmacist Prescriber initiative. At the February 2016 Board meeting, the Board approved the College’s Certified Pharmacist Prescriber Initiative Draft Framework to support consultation with pharmacy professionals, other health care prescribers and patients. The Draft Framework scopes out the requirements for prescribing, as well as the proposed standards, limits and conditions for pharmacists to prescribe medication. At present time, British Columbia is one of the few provinces in Canada where pharmacists are unable to prescribe medication. The College is currently seeking input on the Draft Framework through an online consultation until July 15, 2016.

The College implemented the Practice Review Program (PRP) in community pharmacies in January 2015. The PRP is an in-person review of a pharmacy professional’s practice and the pharmacy where they work. Under the PRP, every pharmacy professional and pharmacy will be reviewed at least once every six years to ensure they meet College standards. The PRP has two components: the Pharmacy Review and the Pharmacy Professionals Review.

In its first year, the College completed over 200 Pharmacy Reviews and more than 550 Pharmacy Professional Reviews. The progress to date shows that the College is on track to review every pharmacy professional and every pharmacy within the 6-year time frame. Transparency is an important element with the PRP, as the goal of the program is to have all registrants and practice settings meet, College standards. The PRP will expand to include hospital pharmacy in Fall 2016.

The College began regulating pharmacy technicians in 2010/11, with a 5-year transition timeline for those who were currently practicing as pharmacy assistants to meet the requirements for regulation. The transition timeline ended on December 31, 2015. The College now regulates 1331 pharmacy technicians across the province – a huge uptake from the 61 who were registered with the College in 2011/12.

In December 2013, the College introduced bylaws which prohibit the provision of incentives for prescription drugs and pharmacy services.

The College took considerable time to research the issues and concerns to gain an understanding of all perspectives when drafting the bylaws. The College conducted an environmental scan of other Canadian pharmacy regulators’ policies, collected information from recent surveys performed by national and regional pharmacy bodies, and collected feedback from its own registrants and the BC public.

The College stands behind the bylaws as they were created in the best interest of public safety. Learn more about the bylaws here: http://www.bcpharmacists.org/prohibition-provision-incentives. 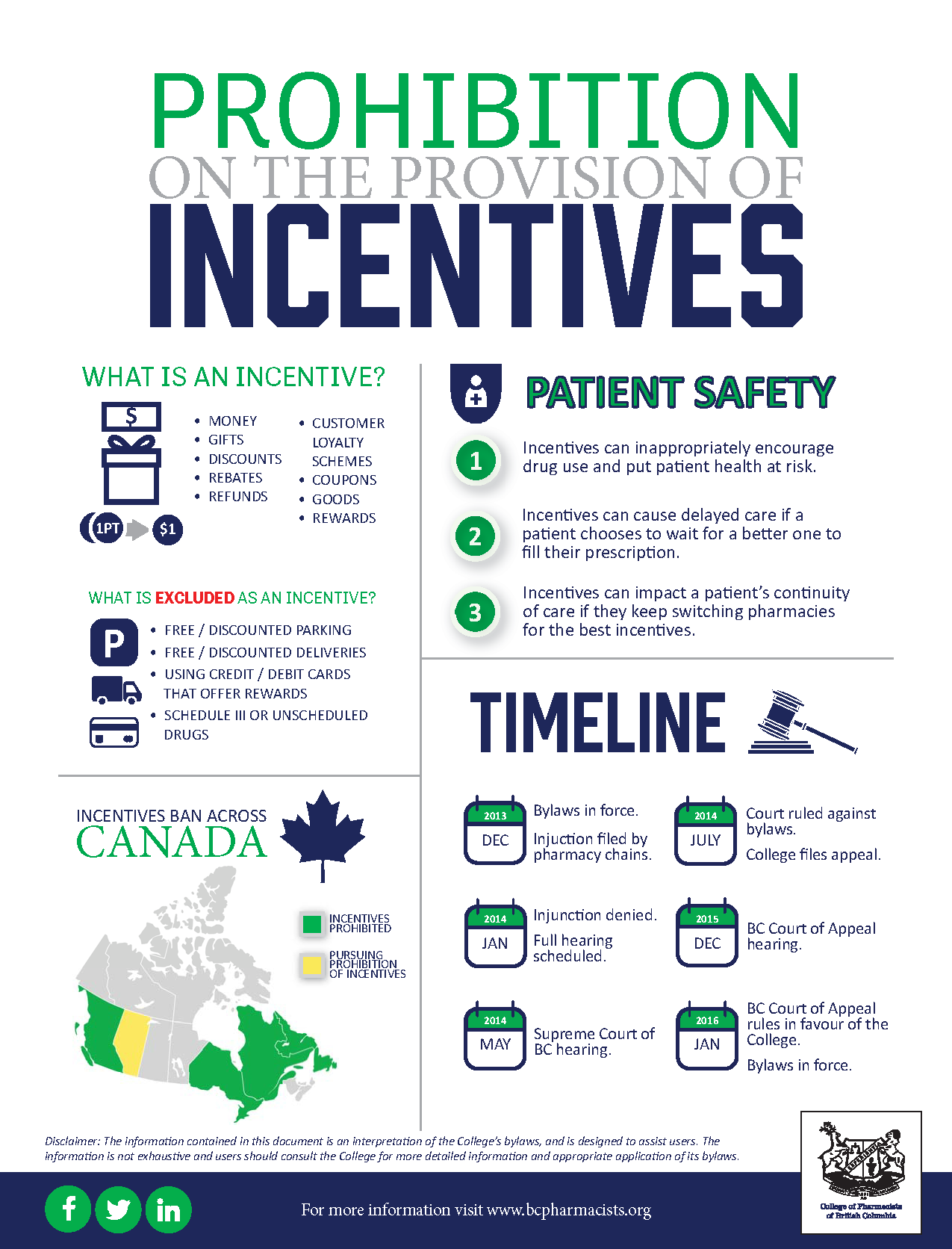 At the November 2015 Board meeting, the Board approved a motion that requires registrants to complete accredited learning as part of their annual professional development to maintain registration. Previously registrants had to submit a minimum of 15 hours of professional development per year. Effective January 2016, a minimum of 5 hours of the 15 total hours must be accredited learning.

This decision was brought forward by the Quality Assurance Committee as it had conducted an environmental scan of continuing education requirements across Canada and found that other provinces required that some to all of the submitted hours must be accredited. In addition, the College found in the last year, almost 80% of College registrants already complete more than 5 hours of accredited learning in their annual submission.

The College also sent a learning needs survey to all registrants in November 2015 to gauge where the College could focus its efforts to support future accredited continuing education. Over 1000 registrants responded to the survey and highlighted priority learning areas including expertise in medications, collaboration, safety and quality, and professionalism and ethics.

College Engages with Registrants, Health Care Professionals and the Public for Next Strategic Plan 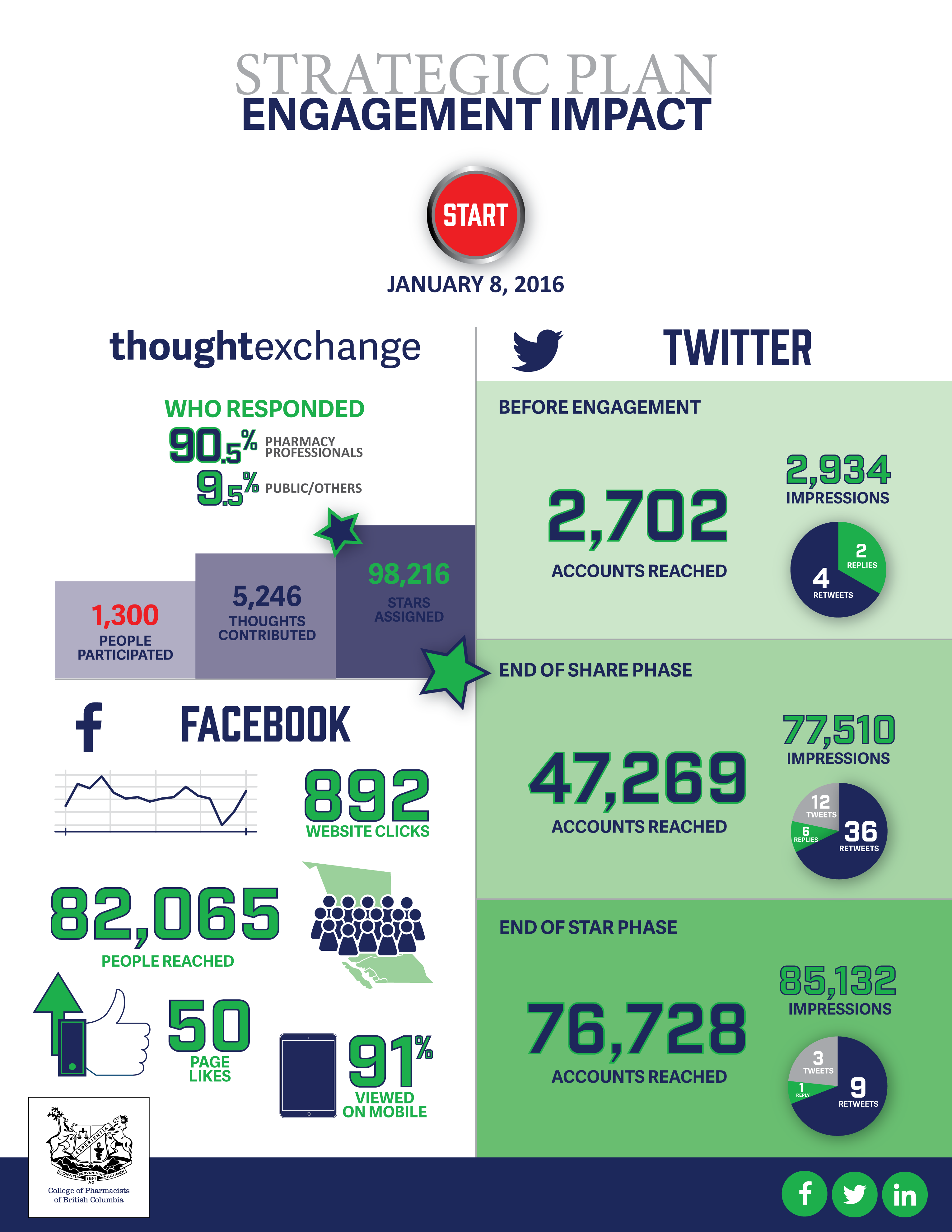 Read a message from our Board Chair.